TOEFL has been regulated as one of the graduation requirements at Bung Hatta University with a minimum score of 400 for all majors, including the English Department. However, there are students still failed in achieving the targeted score. The preliminary research showed that English Department students at Bung Hatta University had difficulties in TOEFL, especially the Structure and Written Expression section. Thus, this research aimed to investigate the difficulties faced by students viewed from material and personal factors. Descriptive research was applied as the research method where the sixth-semester students of English Department were chosen as the subject of the research. There were three instruments used in collecting the data of this research which were the researcher as the instrument; the test of Structure and Written Expression section of TOEFL aimed at identifying the students' ability in the test and collecting the data about the materials faced difficult; interview guide to investigate the factors causing them difficult in the test. Then, the result showed that the ability of English Department students in Structure and Written Expression section of TOEFL was 41% in level C, "Moderate." It proved that the Structure and Written Expression section of TOEFL was the most difficult section to answer two other sections (Listening and Reading Comprehension) faced by English Department students at Bung Hatta University. Among the eight indicators of materials tested in the Structure section of TOEFL, Inversion became the most difficult one to answer. The percentage of difficulty for this material was 85,19%. Thus, in finding the factors causing them difficult, seven indicators were interviewed to the subject of the research. Then, Material Comprehension was the most dominant factor causing the students difficult in the test.

Lecture of  STATE UNIVERSITY OF PADANG 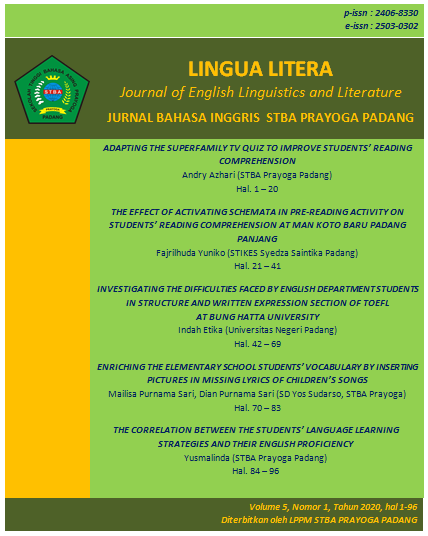